You know the sound of Rock guitar: loud, crunchy, sustained, saturated, and distorted. This effect has been around as long as guitars have been plugged into amplifiers. How was it achieved? They took a small amplifier and cranked the volume until the sound started to “break up,” producing a loud, warm, crackly sound; Perfect for the Blues, and soon after, Rock n’ Roll. 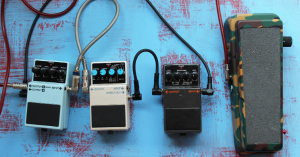 Through the years, this effect has morphed into three distinct types: Overdrive, distortion, and fuzz, each with its own special character. Here is a basic overview of the three types:

Overdrive – The first step in the “distortion” process. Overdrive essentially boosts the amplifier’s signal, making it slightly louder and crunchier without totally sacrificing the clarity of the clean channel. Can vary from a simple volume boost to a searing lead tone with moderate gain (level of grit).

Distortion – Originally made popular by Black Sabbath, Deep Purple, and Led Zeppelin, and very heavily utilized by various subgenres within the “heavy metal” category. Distortion is, to put it simply, mega-overdrive. It operates in the same way as overdrive, but with a greater boost in the pre-amp (gain) stage. Distortion generates a more saturated sound; In other words, the signal is more distorted and has less of the natural “clean” sound of the amplifier. You can access distortion through a pedal or by switching to the distortion channel on your amplifier. Not all amplifiers have a distortion channel, and many choose to use a pedal in place of their amplifier’s distortion.

Fuzz – Fuzz is the final and most distorted of the three effects. Despite being the most extreme of the three effects, the use of the fuzz effect came just ten years after overdrive and around ten years before full-fledged distortion. Grady Martin originally achieved the fuzz tone (by accident) in 1961 on Marty Robbins’ “Don’t Worry,” when he used an amplifier with a faulty preamp. Since then, guitar players have replicated that sound by using fuzz pedals, which alter the wave-form of the guitar signal, changing it to a square wave.